FROM MY HEART TO YOURS

by Becky Shultz | April 2015 | From My Heart to Yours, Uncategorized

Last week the boys and I went on another school adventure. This time to Salt Lake City, UT. In preparation, we did a little study on the Donner-Reed Party, Mormon pioneers, Joseph Smith, Brigham Young and Mormonism.

We hit the road, entered Utah and followed the Pioneer Trail…pulling over at various stops to see things and read more about the pioneers and their experience entering this land. It was just our travel day, but already It was fascinating! 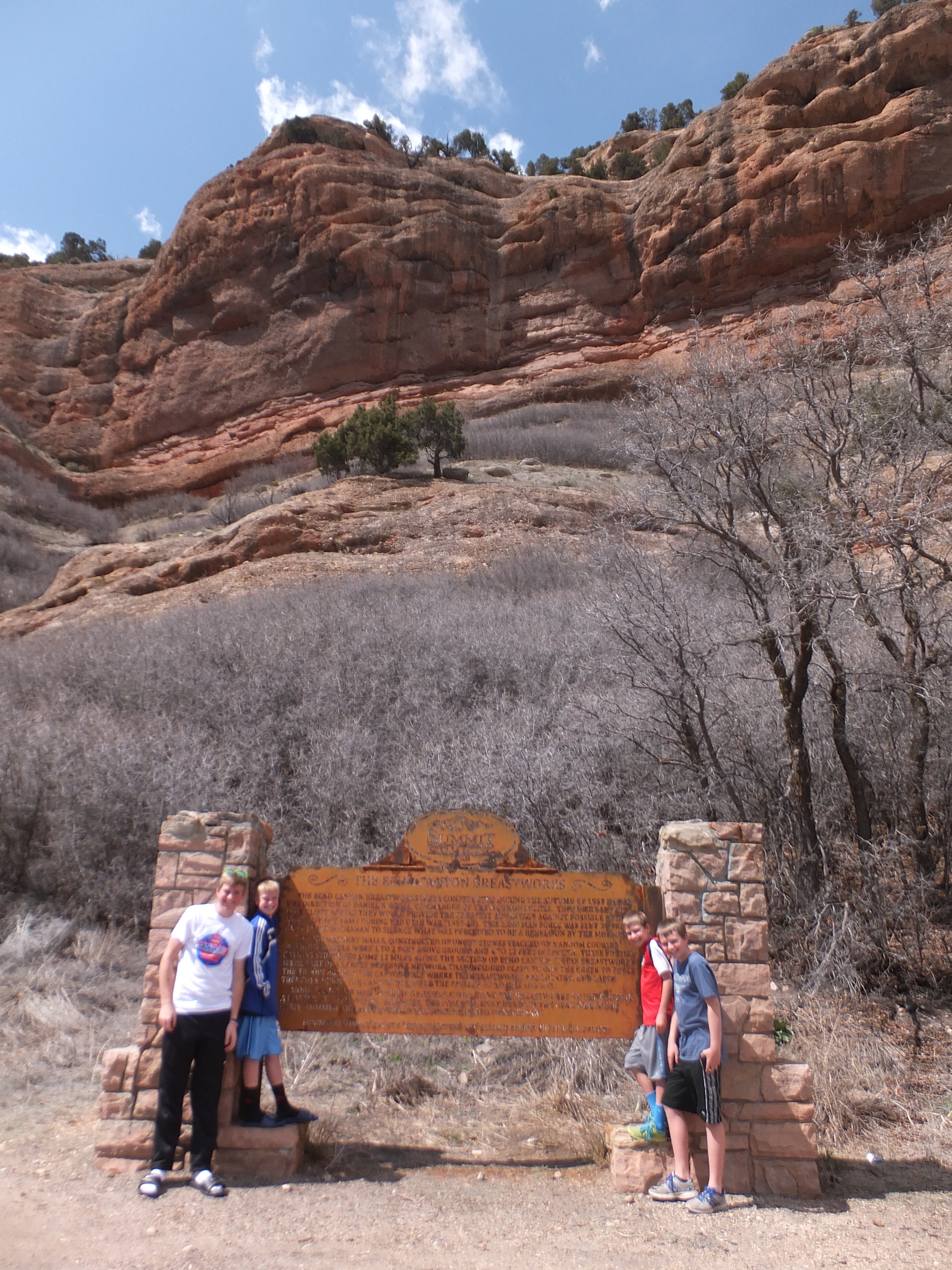 Here we are reading about the Echo Canyon Breastworks.

We entered SLC, visited “This is the Place” Heritage Park (the last stop on the Pioneer Trail — designed to give information about the Pony Express and dedicated to Brigham Young and the Mormon pioneers who came out of the canyon, saw the land before them and said, “This is the place!”), set up camp, took a walk along the Jordan River (I chuckled at the name, but later learned that this land is Mt. Zion to the Mormons), then hit the sack, preparing to rise the next morning with the sun. 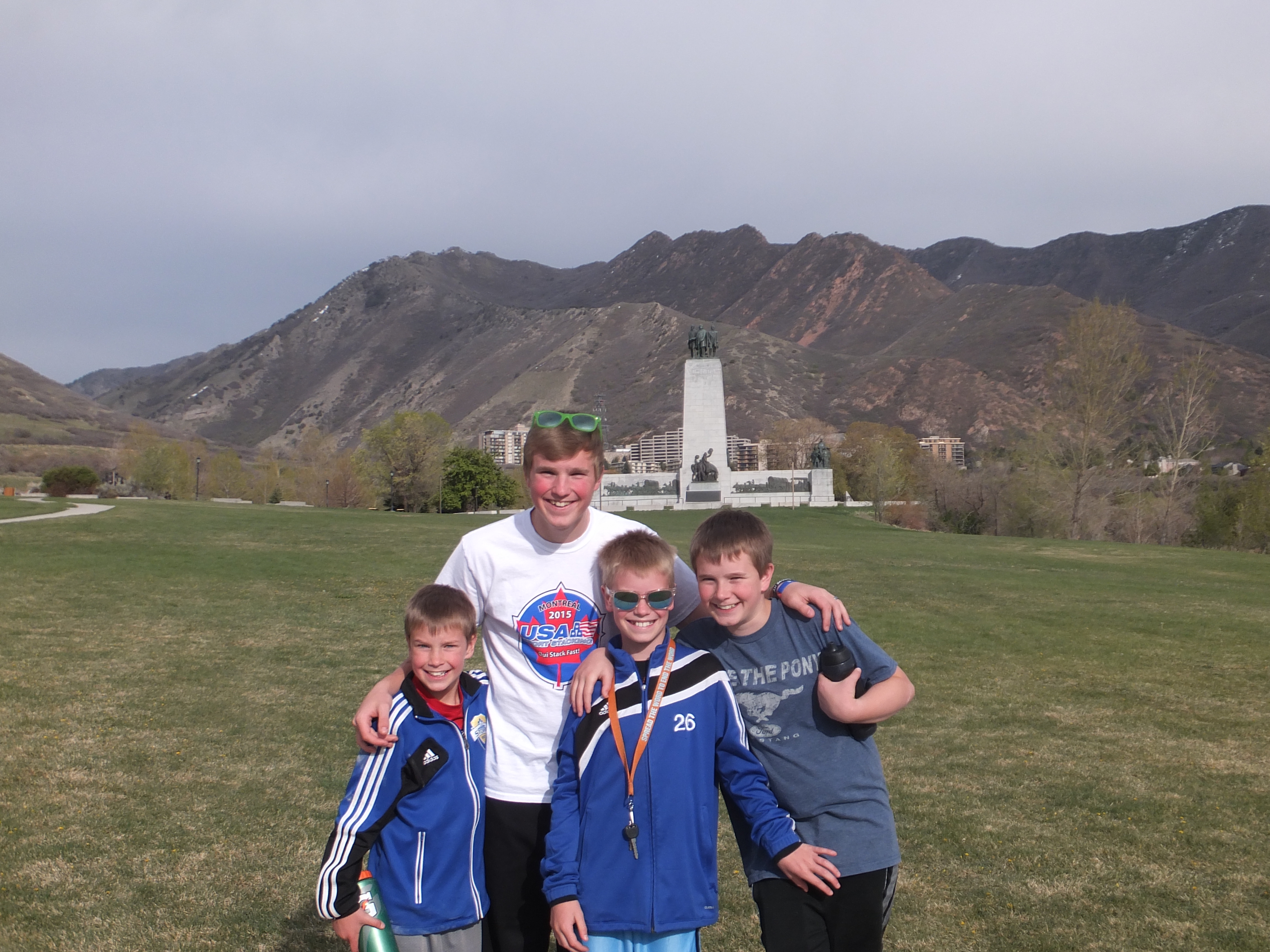 This is the Place Heritage Park

The next few days we explored the area and soaked in as much history as we could.

Day 1: We went to Olympic Park, home of the 2002 winter Olympic games, and tried our hand at the ski jump. We mastered that simulator and the boys somehow think they’re ready for the real thing. Ha! We hiked in Big Cottonwood Canyon, making our way through the snow to Doughnut Falls. We took a dip (the boys, not me…YUCK!) in the Great Salt Lake and learned that there is no outlet for the water besides evaporation, which leaves behind all the sediments. So…the Great Salt Lake can never get rid of its salt and will continue to get saltier. The boys did float and they did stink. Thank the Lord we were at a campground with a shower! 😉 We ended our “school” day late, touring the most beautiful Capitol building we’ve seen so far this year. 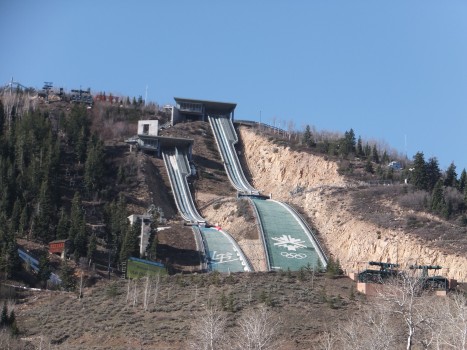 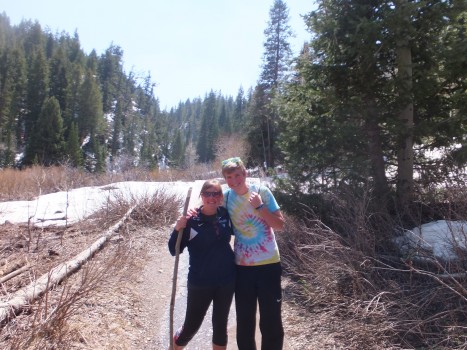 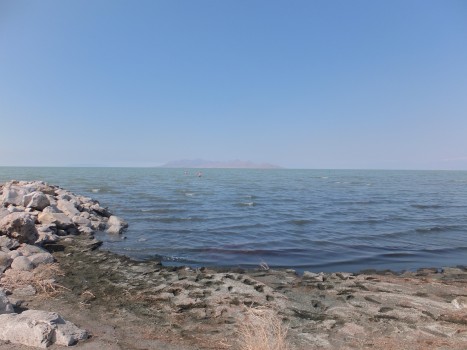 The boys out in the Great Salt Lake. 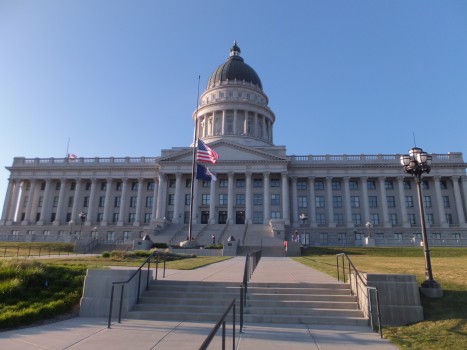 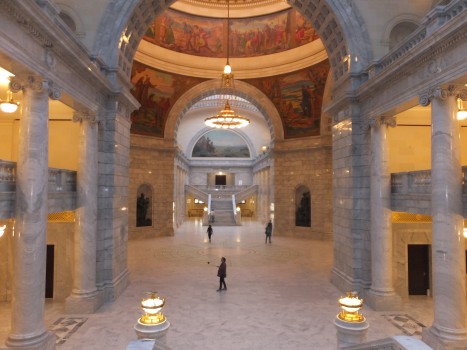 Day 2: We spent about 8 hours or so driving along the Pony Express Trail, pulling over at signposts to read all about the Pony Express. We stopped at Camp Floyd and learned about the three years the Union Army was posted there. We visited the Stagecoach Inn, which became a famous stop for the stagecoach and the Pony Express. We drove on desert, dusty roads out in the middle of nowhere, UT, getting a feel for what it must have been like for the Pony Express riders. The most exciting thing occurred when we were at an interactive stop looking at a monument and reading signs — we were enveloped in a dust devil that was carrying tumbleweeds. I can’t even express to you how crazy and cool that was for four boys and their mama out on an adventure! We ended this day by meeting one of Aaron’s sport stacking friends at the train (he lives just outside SLC) and hiked up Ensign Peak which overlooked the city. Mountains surrounded us as we watched the sun set behind the Great Salt Lake. Spectacular! 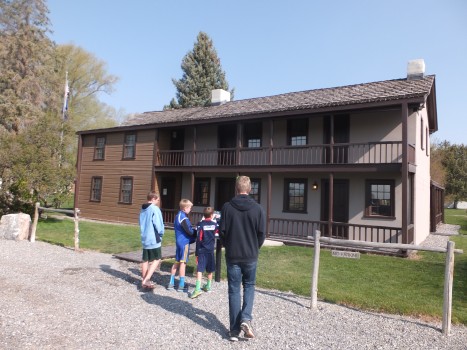 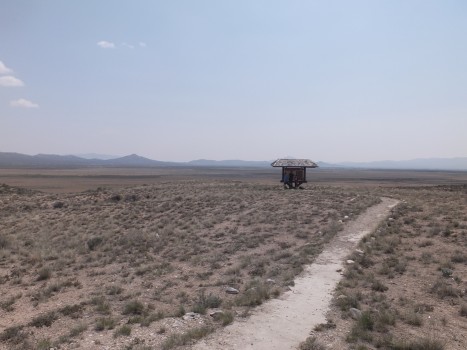 We were seriously out in the middle of nowhere! 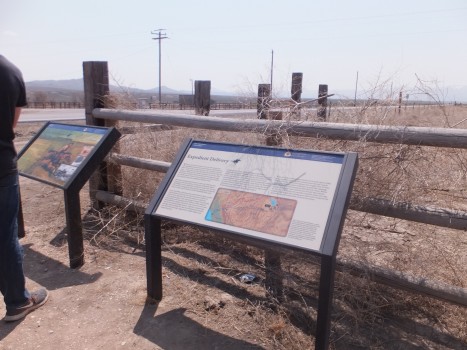 Tumbleweeds that were caught up in a crazy attacking dust devil. 😉 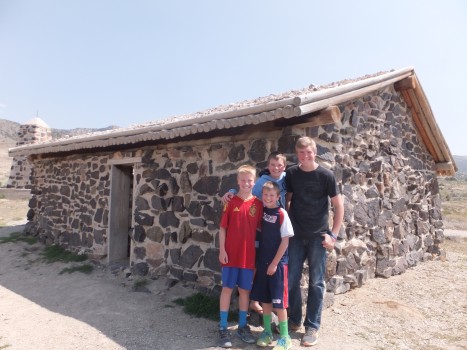 Our last stop along the Pony Express Trail. 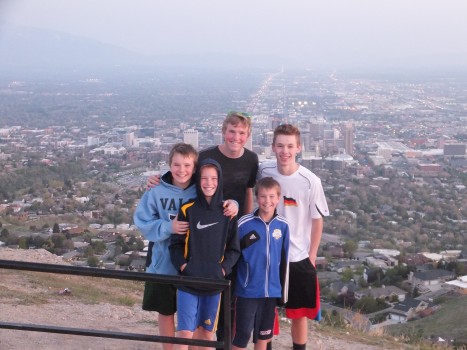 Day 3: We got all-day passes for the city train and jumped on early because there was a lot to see downtown. We started at the Pioneer Memorial Museum. Three very full floors and a couple of hours later, we headed to Temple Square. Stunning. After speaking with a Mormon missionary who asked if any of our sons were interested in living the life of a missionary (everyone assumed we were Mormon), we graciously begged off the conversation and walked up the street to tour the Beehive House — a large home Brigham Young had built for his growing family. He did have many wives, after all. It quickly became apparent that we were the odd ones. The two young Filipino missionaries started the tour by asking if we were all a part of the Mormon Church. We were the only non-church members. After the tour and a bit of being “witnessed” to, the next two hours were spent train-hopping. We were attempting to visit Fort Douglas Military Museum, but some confusion about train direction led us to hop on the wrong train. We met some interesting people, learned about different train colors and routes and had fun seeing the University of Utah, so…one of those “life is school” moments. Our last stop of the day (which we were late for) was a pre-scheduled tour of Wheeler Historic Farm. I called as we were driving away from the city to let them know about our afternoon of riding the wrong train. Thankfully, they were understanding and waited for us. We toured the farmhouse, walked the grounds looking at all the animals, then helped milk a cow and bottle-feed her calves. A favorite stop of ours! 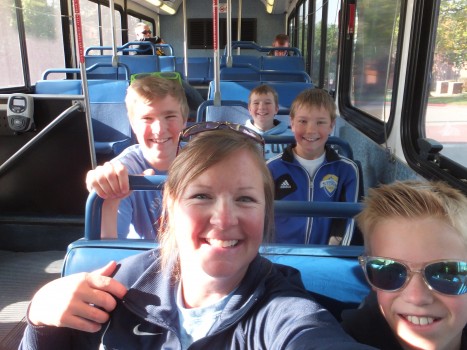 Hopped from a train to a bus. Eventually back to the WRONG train. 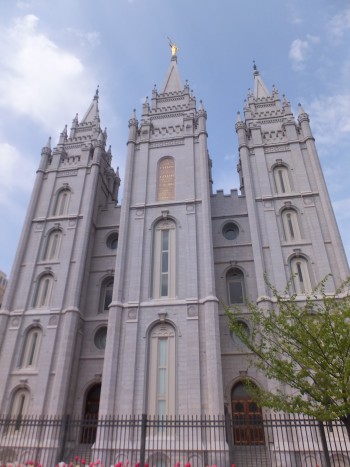 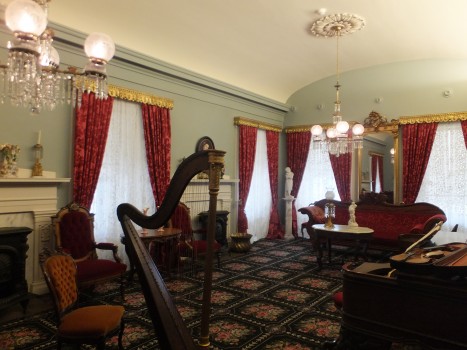 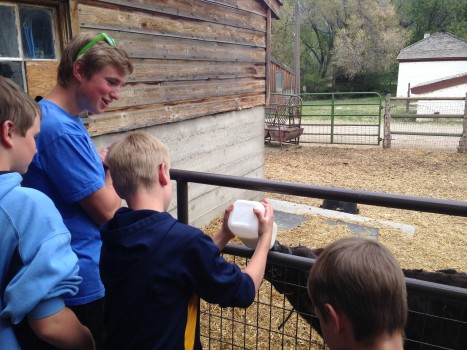 Salt Lake City is a beautiful place with a very rich history. We loved our time and learned a lot. But, I will tell you that I felt a darkness and heaviness in my heart during our time there. Our boys describe the feeling as “awkward”.

If you have an understanding of the Mormon faith, if you study its history, if you read the Book of Mormon or the Doctrine and Covenants, then you’ll know that such a great distortion of Scripture is NOT from the One True God. Untruth masked to look like truth can only come from Satan.

My niece has a friend whose father remarried — a Mormon woman. Now everyone in her family except this young girl is attending the Church of Jesus Christ of Latter-day Saints (which sounds quite lovely). This girl is disheartened that her own family would so easily turn away from their faith.

If you spend time on an LDS (Latter-day Saints) website, you will find it difficult to see any differences between the heart of Christianity and Mormonism. It is hidden. However, those differences are life-altering (or should I say eternity-altering).

So, how do we combat this? How do we remove the mask for our children so they do not so easily turn away from their faith?

It’s all about Jesus and His Word (not the Book of Mormon, but the Holy Bible). The more we read His Word, the more we memorize it, the more we dig deeply into it, the more we understand biblical truths, the more we are able to know who Jesus is. Without a biblical knowledge of Jesus (Truth), it is difficult to know Him intimately.

You see, when we know the Truth, our hearts are not so easily swayed by the Deceiver. When we have a deep, abiding relationship with Jesus, a heart and a head knowledge of Him, our faith is real and vibrant.

May we teach the next generation the importance of knowing Jesus with our hearts and with our heads. May we read His Word and know the stories in it. May we spend time hiding God’s Word in our hearts and in the hearts of our children. This is the best way to remove the mask from untruth made to look and sound like Truth!